Cookie preferences
This website uses cookies, which are necessary for the technical operation of the website and are always set. Other cookies, which increase the comfort when using this website, are used for direct advertising or to facilitate interaction with other websites and social networks, are only set with your consent.
Configuration
Technically required
These cookies are necessary for the basic functions of the shop.
"Allow all cookies" cookie
"Decline all cookies" cookie
CSRF token
Cookie preferences
Currency change
Customer recognition
Customer-specific caching
Individual prices
Selected shop
Session
Comfort functions
These cookies are used to make the shopping experience even more appealing, for example for the recognition of the visitor.
Note
Store Locator
Statistics & Tracking
Affiliate program
Google Analytics
With Google Analytics, we analyze how you interact with our website to find out what is good and what does not.
Provider: Google LLC (USA) or Google Ireland Limited (Ireland, EU) (Privacy policy)
Track device being used 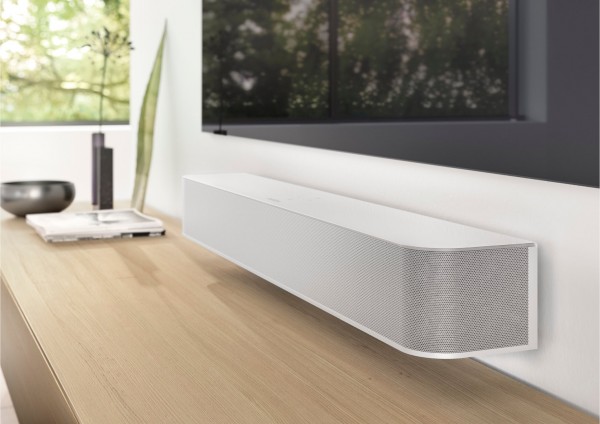 Perform the update
The S100 Audiobar automatically receives its new software when the device is restarted. In any case, make sure that your network (WLAN / LAN) is accessible when you restart.
New with the STUDIOART update
S100 Audiobar (Software Version: V57, KleerNet: V5)
This is NEW in the OSD menu (screen menu):
1.) „TV Boost“: To increase the volume level via ARC (Audio Return Channel) by + 10dB.
With some TV manufacturers, the sound output via ARC is too quiet. With the „TV Boost“ function this can be increased by + 10dB and thus any differences between TV and other sources can be compensated. This function therefore only affects the ARC channel and not other sources.
2.) „Wireless band“: KleerNet Connection
Selection of the radio channel for rear speakers or bass modules.
In the event of interference from other radio sources, a different frequency range can be selected in order to improve the radio connection. You can choose between „automatic“
(as before), „2.4Ghz“, „5.2Ghz“ and „5.8Ghz“. By selecting different radio frequencies, up to three systems can now be operated in one household. For the time being, both points can only be changed in the OSD menu (screen menu) of the S100. An update of the STUDIOART app is also planned at a later date.

Note: Trouble-shooting in the event of dropouts during music playback
The STUDIOART speaker systems have been developed for joint operation with WLAN networks and Bluetooth networks. Nevertheless, there may be mutual influences with one another and with other radio systems that also work on the same frequency if they are too close to the STUDIOART loudspeaker.
This can lead to interruptions in music playback. Since the STUDIOART loudspeaker system is constantly looking for the optimal frequency within certain areas where there are as few other sources of interference as possible, it automatically switches to the next of three frequencies if there is too much radio traffic on this frequency. But as soon as other devices are in operation that also work according to this principle, the devices may cause each other to change frequencies. A constant change is the result, which can lead to music dropouts.
To prevent this, a different frequency range can be selected using the menu item „Wireless band“ in the OSD menu (screen menu) as described under 2.) above.

This website uses cookies, which are necessary for the technical operation of the website and are always set. Other cookies, which increase the usability of this website, serve for direct advertising or simplify interaction with other websites and social networks, will only be used with your consent.
Decline Accept all Configure